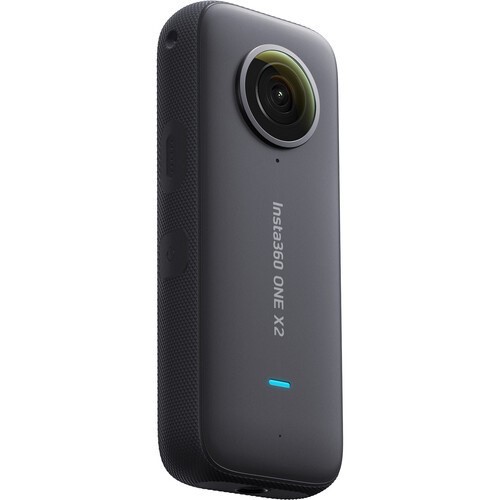 The ONE X2 from Insta360 is a 360° action camera with dual- and single-lens modes. In dual-lens mode, also called 360 Cam Mode, the camera uses both its front and rear lenses to capture immersive 360 5.7K resolution video with automatic internal stitching, and then using the companion iOS/Android app, you can navigate through the shot and select a specific angle and share it directly to social media. Since the camera captures in all directions, you’ll never miss a shot again. Its dual-lens design also unlocks creative effects like the Invisible Selfie Stick, where the stick is automatically stitched out of the final footage for impossible aerial angles.

Single-lens mode, also called Steady Cam mode, turns this 360 camera into a standard camera that you can capture regular shots with. In both modes, FlowState Stabilization, with an advanced scene-detection algorithm, digitally smooths out your shot, so it looks more steady. The ONE X2 is designed 33′ waterproof as is, without any waterproof housing required, so you can take it underwater with you as well as use it in the rain. The camera also features a round touchscreen on the front for framing and monitoring your shots. For capturing audio, the ONE X2 is designed with four onboard mics with wind reduction to capture clean 360 audio, and it also supports an optional dedicated 3.5mm mic adapter for connecting an external mic for more professional audio.

Other features include voice control, one-tap cinematic edits via the mobile app, recording, control from an optional Apple Watch, recording audio directly to optional AirPods, and much more.

Shoot first, point later. Change the perspective of your footage and select your favorite angle after the fact in the app.

No drone? No problem. ONE X2 automatically removes the selfie stick from your footage for drone-like third-person views.

The ONE X2’s image stabilization and 360 horizon leveling technology ensures you always get smooth footage, no matter the action.

Waterproof down to 33′ without any waterproof housing required.

Immersive 360° audio with four onboard mics with wind reduction.

In the companion iOS/Android app, select the footage you want to edit, and the Shot Lab feature will apply templates to quickly edit the footage for you automatically.

In the companion app, via a single tap on your subject, whether a person or object, Deep Track 2.0 will track the subject and keep in the center frame.

The Auto Frame function in the app reframes your 360 shots for you based on your best angles.

JPG (can be exported via a mobile app or desktop studio), raw (DNG, must be edited on desktop).